Are you ready for a country boy with a big heart? 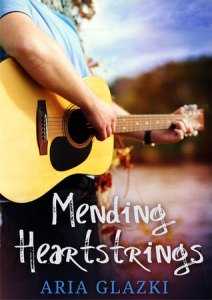 Kane’s a country singer who’s tangled with too many deceitful women. He’s learned his lesson: girls are for flirting and fun; emotions are for his music. But after spending a night with an earnest woman unlike any he’s known, he can’t force her out of his mind. So he goes in search of the woman he knows only as “Elle.”

On her last night in Nashville, the staunchly pragmatic Sabella found herself in a situation more suited to a romance novel than reality. Swept away, she ignored her rigidly self-imposed rules, succumbing to the fantasy just this once. But she knows real-world relationships have nothing in common with their fictionalized portrayals. When Kane unexpectedly shows up at her Portland apartment, she must choose between the practical truths she has learned and the desire for a passionate love she has struggled to suppress.

Despite the distance, Kane’s tour schedule, and their meddling friends, both are drawn to the chance for a romance neither quite believes is possible.

“So how did you know I was from out of town?” She hadn’t thought she stood out quite so blatantly, and there were plenty of people in Nashville without Southern accents, so that couldn’t have given her away.

“You don’t act like a local girl,” he answered, relaxing back into the couch. His hands rested gently on his thighs, and he sat with his ankles crossed. He looked so perfectly comfortable that she felt even more self-conscious, standing in the middle of the room, thumbs tucked into the pockets of her jeans.

“And how do local girls act?” she asked curiously, shifting her weight to one hip to appear more relaxed.

“Confident. Assertive. They know exactly what they bring to the table, and exactly what they want to take away.” He paused. She felt herself swallow but continued to watch him. “But they rarely take any real risks,” he finished.

Kane stood and stepped forward, which brought him a touch closer to her than would have been casual. Sabella could see the stubble beginning to grow over his angled jaw and slightly rounded chin, his hair brushing over the tops of his ears and down to the back of his shirt collar, the thin scar that angled from right above his lip toward his left cheek, and the slightly flattened line of his nose that told her it had been broken at least once. He smelled faintly of wood with an overlay of beer, a combination she never would have imagined to be alluring.

She shifted moderately closer to him. If his assessment of these women was accurate, she definitely had little in common with them. Maybe it was her natural curiosity, but she almost never knew well enough to avoid taking risks, though she relentlessly attempted to impose sensible limitations on herself. Clearly that wasn’t working so well tonight.

Over a foot remained between them, yet their stance felt oddly intimate. Until the door was opened by an older woman in a jean skirt, black halter top, and well-worn leather boots.

Sabella took a hasty step back, but the woman was looking at Kane. He hadn’t reacted as sharply as she had, but rather did a slow half turn toward the door.

“Amber Lynn,” he said by way of greeting and smiled somewhat crookedly.

“Kane,” she responded, with a voice so husky she must have spent years shouting to be heard. “Not your best night,” she said casually then turned toward Sabella. “Now you must be why the boys keep on askin’ me for a karaoke night.” Her eyes took in Sabella’s silky purple top, manicured hands, casual sandals, and loosely waved hair, which didn’t accurately reflect the fact that it had taken almost an hour to style. She took her time, as if her eyes moved through the same honey that dripped from her voice—though that’s how Sabella thought of most country accents she had heard in her brief time in Nashville.

“Amber Lynn here’s the owner of the Fiddle an’ Steel,” Kane explained. His drawl was actually not as thick, with only a hint of flattened vowels and that light softening to some of his consonants.

“Welcome to Nashville,” Amber Lynn replied. “What’re you hidin’ in here for? A lotta them boys would sure love to get to know ya better after that little show y’all put on.” The last few words were directed at Kane. Amber Lynn narrowed her eyes a bit and pursed her lips, as if trying to discern Kane’s motives.

Amber Lynn considered him for a moment, glanced again at Sabella, and turned back toward the door. “Behave yourself, boy,” she threw over her shoulder as she walked out.

“You know me!” he called after her, grinning. “So.” He turned back to Sabella, and his mouth settled into a half smile. “Can I buy you a drink?”

I think the main things I like so much about this one is that there aren’t TOO many misunderstandings or drama.  There are a couple of places where their hangups got the better of them but they are handled realistically and well.  I saw a lot of places where Glazki could have created even more trouble for Kane and Sabella but instead it is a sweet piece about people trying to get to know each other, fall in love and find a way to be together.

There’s also a good opportunity for more great stories with Kane’s bandmates (& Ella’s friend) and I’m looking forward to them getting their own HEA.  I really like seeing the friendship that had developed between the three guys and a glimpse at how they are together on the stage & on the road.

Aria’s writing story started when her seventh-grade English teacher encouraged her to submit a class assignment for publication. That piece was printed, and let’s just say, she was hooked!

Since then, Aria has run a literary magazine, earned her degree in Creative Writing (as well as in French and Russian literatures), and been published here and there. Though her first kiss technically came from a bear cub, and no fairytale transformation followed, Aria still believes magic can happen when the right people come together—if they don’t get in their own way, that is.
Other than all things literary, Aria loves spending time with her family, including her two unbearably adorable nieces. She also dabbles in painting, dancing, playing violin, and, given the opportunity, Epicureanism.

Back in the Texan’s Bed

The Vineyard at Painted Moon

Song for a Cowboy

The World According to Liam

Running Away with the Bride