I’m so excited to start off the week with such a great book … and author Dani Collins is helping to get us in the mood with a couple of fun facts!

When Sterling realizes he’ll be stuck in Liebe Falls for longer than a weekend, he decides to move into his grandmother’s old house. I mentally used a bungalow that belonged to family friends. It’s a two bedroom rancher with no bells or whistles, but cozy.

I don’t know why that house jumped into my head, especially because the real one is very well kept while I wanted mine to be terribly run down. Perhaps it was the nostalgia factor. I remember being a kid in that house and I wanted Paige and Sterling to have memories there, too.

The house is situated behind Paige’s, built when hers was a decent middle-class neighborhood. Sterling takes it into his head to renovate, not expecting to uncover family secrets that nearly destroy Paige. Such a modest house to carry so much importance!

A long time ago, I had a day job at a company that made stair parts. Super fascinating stuff. Not. It was extra super-not-fascinating when we were audited. It was a yearly thing done by the company’s accounting firm, not by the government. I’m the chatty type so I asked one of the accountants how embezzling works. That was interesting, especially since I wasn’t bold enough to say, “Hey, I’m an aspiring author.” Nope, I just looked incredibly suspicious asking detailed questions about how to get away with a serious crime.

When I came to write the book, I had my factory make beds instead of stairs. It seemed sexier. In fact, the working title was Hot Beds, Cold Feet. The second book was called Sweet Dreams, but when I finally got both books rewritten and ready for prime time, I had my reader group help me with new titles. I wanted readers to know they were connected books, which is hard to tell with those old titles, so now they’re Not In Her Wildest Dreams and Only In His Sweetest Dreams. 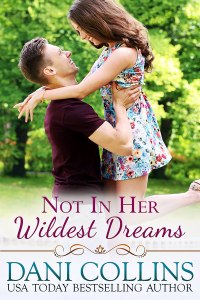 Not In Her Wildest Dreams

Sterling made a fool of himself over Paige once. Never again. He only returns to the factory his mother calls his ‘legacy’ to ensure Paige doesn’t pull a fast one. When their chemistry blazes hotter than ever, he wonders if he misjudged her, but secrets come to light, including an embezzler she tries to protect, proving she’s still the wrong girl. So why does holding onto her feel so right?

OTHER BOOKS IN THE SERIES

Only In His Sweetest Dreams

When Mercedes takes in her confused niece and nephew, jeopardizing the job she loves at a retirement community, she turns to the new handyman for advice. L.C. can fix anything and he’d love to be part of this misfit family, but he has a secret back home that Mercedes will never forgive.

I have to say this one really didn’t go the way I guessed it would.  But that isn’t necessarily a bad thing  🙂  I thought that Paige and Sterling’s aborted romance – the whole wrong side of the tracks thing – would have been a bigger deal than it turned out to be.  I mean, yes it did leave some scars, as most traumatic childhood events do, but there is so much more to their problems than that.

Thanks to a screwy childhood, Paige is an enabler and spends way too much energy trying to fix everything for her loved ones.  Which means that she somehow finds herself back in the small town that she grew up in, trying to make everything right, and having to face a lot of her demons … including Sterling.

Sterling is also is dealing with family issues thanks to his parents.  He’s got one of those moms – overbearing, manipulative, all about appearances and wearing blinders.  And she’s pushing him to move home to run the family business.  He’s got his own bones to pick with people in the town and being in such close quarters is sure to stir things up.

I get why Paige is so hesitant to get involved again – it is horrible what she went thru at such an impressionable age – but I have to admire Sterling for sticking with her.  He’s not perfect, which is on display with his relationship with his parents and the fight that is still going on with Paige’s brother, but he’s truly a good guy.

I like these two and I enjoyed all of their crazy friends & family.  Not to say that all of them are likeable, but they are fun to read and help keep the pages turning.  All of the hurt feelings, family drama, and personal issues are dragged out & put on display.

Secrets are revealed, the truth finally comes out, and some demons are laid to rest … all in a days work for a small town full of drama.

USA Today Bestseller Dani Collins is the author of thirty romances for Harlequin Presents, Montana Born and herself. Dani lives in Canada with her high school sweetheart. Join Dani’s newsletter and receive Cruel Summer, a short ebook romance, as a welcome gift: http://danicollins.com/free-book/