I really enjoyed the first book in the series and I’m super excited to see what happens next … It’s near the top of my TBR pile so hopefully I’ll let you know soon! 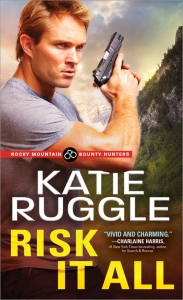 When bounty hunter falls for bounty, they’ll risk it all to save the one they love.

Cara Pax never wanted to be a bounty hunter—she’s happy to leave chasing criminals to her more adventurous sisters. But if she wants her dream of escaping the family business to come true, she’s got one last job to finish.

Too bad she doesn’t think her latest bounty is actually guilty.

Henry Kavenski is a man with innocence to prove. But when his enemies target Cara in an attempt to force his hand, he’ll do whatever it takes to keep her safe. Deep in the Rocky Mountains, surrounded by danger on all sides, Henry and Cara will have to learn to trust their unexpected partnership if they want to make it out together—and alive.

When the woman stopped the stroller next to the bus-stop bench and took a seat next to Kavenski, Cara knew something was up. For one, she would eat her phone if that woman would ever set foot on a public bus. Also, Kavenski, for all his hotness, was a big and intimidating guy. No one would casually plop themselves down next to a dangerous-looking stranger, especially with her baby right there.

With both Kavenski and the woman facing forward, it was impossible for Cara to see if they were talking. She was tempted to move closer to the pair to see if she could eavesdrop, but Kavenski had known she’d been following him earlier, and that made her hesitate. It was one thing for her to follow as he skulked around town, but this meeting seemed very shady and purposeful. He’d let her go once, but who knew what he’d do if she had incriminating information on him.

The woman turned her head toward Kavenski for just a few seconds, and Cara hurried to take a few pictures. With the oversize sunglasses, hat, and scarf, it was hard to get an idea of what the woman actually looked like, especially from a distance. The only things Cara was sure of were that she was white, tall, and fashion-conscious.

To Cara’s frustration, she saw that the woman’s lips were indeed moving. Once again resisting the urge to get close enough to listen to their conversation, Cara watched as the woman reached into the stroller and appeared to adjust the baby’s blanket. When she withdrew her hand, however, she was holding something white and rectangular.

Almost bursting with curiosity, even as her heart pounded from fear of discovery, Cara found herself leaning forward, straining to see what the woman had taken from the stroller. In just the split second it took her to pass the item to Kavenski, Cara was pretty sure it was a legal-sized envelope. Before she could see any other details or even take a few steps closer, he slipped the item into his jacket pocket.

The woman stood and pushed the stroller past Kavenski, and Cara realized that she would be passing right by. After a frozen second, she forced her gaze to her phone screen. Her hair fell in heavy curtains on either side of her face, hiding her profile from the woman’s view, and Cara was intensely grateful that she hadn’t pulled it back that morning.

The seconds seemed to tick by agonizingly slowly as the burr of stroller wheels and the sharp click of the woman’s bootheels drew closer. Cara didn’t breathe as the woman passed just five feet away, and her pounding heart was so loud it made it hard to hear if the footsteps were slowing.

When she couldn’t hold her breath any longer, she dared a pseudo-casual glance and saw the back of the woman a half block away. Sucking in a much-needed breath, Cara returned her attention to Kavenski, just in time to see him rocket off the bench right into rush-hour traffic. The movement was so sudden and unexpected that Cara jerked back a step, startled.

“What is he doing?” Without considering the wisdom of what she was doing, Cara bolted toward him, her eyes locked on his big, surprisingly nimble form as he played a terrifying game of Frogger with oncoming cars. Brakes squealed and drivers laid on their horns as Kavenski shot across the road to the far lane. Turning to face the SUV heading toward him, he raised both hands, palms out, like a traffic cop.

He faced down the oncoming vehicle barreling toward him. The tires squealed as the wheels locked, and Cara instinctively reached toward him as if she could somehow snatch him to safety. His huge frame actually looked small as the five-thousand-pound vehicle bore down on him.

Cara reached the curb, a useless shout of warning building in her chest. Kavenski stared down the SUV, not even flinching as it rocketed closer. Just inches from Kavenski, the vehicle lurched to a halt, rocking back from the force of the stop. Cara’s breath escaped her in a rush. She stopped abruptly, realizing that she had been about to run right out into traffic. She’d been so focused on Kavenski’s near death that she hadn’t even thought about her own safety.

As the driver of the SUV rolled his window down and screamed invectives, Kavenski turned and strode over to a small dog huddled in the center of the lane. Scooping up the tiny furball, Kavenski stepped out of the street, waving casually at the still-yelling driver to continue on his way.

Cara gave a small gasping laugh at Kavenski’s nonchalance. He was acting as if risking his life to save a tiny dog was no big deal, while Cara’s heart was still trying to pound out of her chest and her hands shook with an overdose of adrenaline. As if he’d heard her slightly panicked laughter, Kavenski met her gaze across the four lanes of traffic. They stared at each other for an eternal moment before the corner of his mouth kicked up in more of a grimace than a smile.

When she’s not writing, Katie Ruggle rides horses, trains her three dogs, and travels to warm places to scuba dive. A police academy graduate, Katie readily admits she’s a forensics nerd. Connect with Katie at http://katieruggle.com/, https://www.facebook.com/katierugglebooks, or on Twitter and Instagram @KatieRuggle.

5 copies of In Her Sights 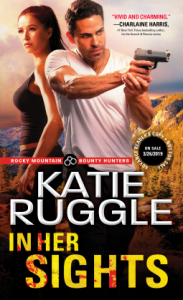 Deep in the heart of the Rockies

Fighting to save each other

…and the men who steal their hearts

Bounty hunter Molly Pax fought hard for everything she has, turning the bail recovery business she shares with her sisters into an unqualified success. So when their sticky-fingered mother jumps bail and puts the childhood home up as collateral, Molly’s horrified. To make matters worse, every two-bit criminal in the Rockies now sees her family’s misfortune as their next big break.

Enter rival bounty hunter John Carmondy: six feet of pure trouble, with a cocky grin to match. John’s the most cheerfully, annoyingly gorgeous frenemy Molly’s ever had the pleasure of defeating…and he may be her only hope of making it out of this mess alive.

While Ruggle’s latest is more suspense than romance, I had fun reading it.  There’s a lot going on for Molly – the sister, their mother, trying to catch the next jump, and keeping one step ahead of John.

I’m not 100% sure why she struggles so much with letting John close, but it does lead to some fun moments … and a few head-shaking ones full of snark on Molly’s side.  Honestly, if I was John I’d probably have walked away a long time ago but the man has grit, heart, and dedication (all good attributes for a hero).  Her resistance does throw a bit of a damper on their relationship so if you were hoping for more of a love story it takes a bit to get there.

There’s a ton of action, danger, and suspense to keep you busy while you wait, though.  Half the siblings are busy trying to track down their mom and figure out what’s going on with her.  The rest are trying to catch a pretty dangerous character in order to keep their house out of the hands of a sleazy bail bondsman.

Ruggle has always had a way at delivering extremely satisfying suspense elements and she proves herself again here.  I can see why some may have been disappointed at the lack of romance (and Molly pushing John away again and again) but I found it fun enough that it didn’t matter so much to me 🙂

(Start of a series with a cliffhanger of an ending, so be warned!)