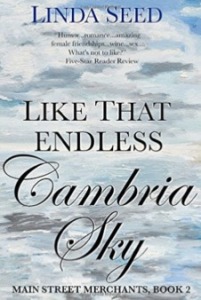 Genevieve Porter was forced to flee the art world of Manhattan after she blew the whistle on the shady practices of a powerful dealer. Now she owns a small gallery in the breathtaking beach town of Cambria, California. For Gen, this is a place to regroup; she’s poised to restore her reputation in the art world and return to New York in triumph. When she meets Ryan Delaney, a cattle rancher who’s more than he appears to be, she’s ready for a sexy roll in the hay-literally. But when her feelings for him become more than casual, she realizes that his roots on the Central Coast go back generations, and it’s going to be a challenge to lure him away from his family’s land. If these two are going to make a life together, one of them is going to have to give up old ideas, old goals-old feelings about what success means, and what makes a place a true home.

I love the feeling of family between the girls in this series.  They have a closeness, understanding and support that most people hope to find.

I get why Genevieve wants so badly, and works so hard, to head back to NY.  It was her goal and she had it taken away from her.  Developing something with yummy rancher Ryan only complicates things … but he’s awfully hard to resist.  He’s down-to-earth, caring and hardworking.  Sexy and smart, he’s got a lot going for him.

I’m a little confused about the depth of the conflict toward the end.  I’m not sure I totally understand why things blew up to QUITE the level they did – some of it, but not all of it.  But I think that it is handled well and leads to a conclusion that works for everyone.

I’m definitely looking forward to what Seed has for us next.  These women (and men) may be different personalities but they are all likeble, with a great bond, and are bound to have blast on their road to true love.

(Part of a series, but can definitely stand on its own.  I do recommend picking up Moonstone Beach for a fun read.)

Kate Bennet owns a small bookstore in Cambria, California—the kind of shop that smells like mildew, furniture wax, and old pages, the kind where you’ll find a cat napping atop the used biographies. Two years out from a divorce that left her emotionally fragile, Kate is starting to think that maybe she’s ready for love again—or at least for a fling with a hot man. Jackson Graham is a local chef who’s controlling when it comes to food, careless when it comes to women, and temperamental when it comes to just about everything.

When Kate’s friends mobilize to set things up between Kate and Jackson, she expects some casual pleasure followed by a hasty goodbye, but Jackson’s long-term crush on Kate means that he’s in this one to win. The problem is, neither he nor Kate knows whether he can change the self-defeating habits that usually send women scurrying for the door as soon as the afterglow fades.

Throw in a beautiful backdrop of rocky beaches and rugged coastline, a manipulative father, a Mary Kay–pushing stepmother, a yapping Pomeranian, and a nervous ring-tailed lemur, and you’ve got Moonstone Beach, the first contemporary romance in a series of four about Kate and her friends, Gen, Lacy, and Rose.

I’m super excited about this series!  I really enjoyed seeing Kate and Jackson come together and bring out the best in each other.

Kate doesn’t do enough to stand up for herself but Jackson, who can be a little too abrasive :), shows her the support she needs.  He isn’t the most sensitive person (*snicker*) and can be a bit much for most people, but she sees the good below the rough surface and knows how to handle him.  It helps that he feels enough for her that he’s willing to try harder than he ever has before.  Of course that doesn’t stop him from making some bonehead moves but he also knows enough to make things right.

Moonstone Beach is a great story about a couple of people who are feeling their way into a relationship and can’t help but make a mistake or two – just like real life 🙂  Seed’s writing is so smooth that this was a very fast read for me.  And she also does a great job of introducing the secondary characters in a way that makes it just enough  that readers will be ready for the rest of the series but doesn’t take away from Kate & Jackson’s story.

Buy on Amazon … and while you are there get the second book, Like That Endless Cambria Sky, as well 🙂