I love a second chance romance … how about you? 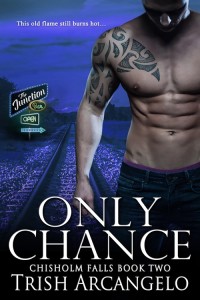 Fallon Gentry is back in her hometown after leaving an affluent life in Dallas, and her cheating ex-husband, behind.  She’s ready to start over, even if that means dealing with the pain of her first love’s betrayal left buried in the past.

Lucas Chance is a working class guy leading a simple life.  He plays the part of the town ladies’ man but deep down he’s still reeling from old wounds, namely a heart shattered when the only woman he ever loved walked away.

They’re both shocked when Fallon unknowingly shows up on Lucas’s duplex door step, looking to rent the unit next door.  Lucas is too intrigued to tell her no and Fallon is too desperate for a place to live.  There’s also the blazing attraction still between them.  Now as landlord and tenant, Fallon and Lucas battle their feelings.

Will they discover the truth behind what drove them apart and take their only chance at true love?

She knocked on the door.  “Lucas?”

The door opened and an arm shot out.  Before she knew it she was pulled inside and the door slammed shut with her back against it.  The bank bag and paper slipped from her hand as he caged her in.

“Good,” he said, moments before his lips covered hers.

He didn’t touch her anywhere but on her lips, his hands braced against the door on either side of her head and his rigid body inches from hers.  Somehow that only made it hotter. The intensity of that one contact was like a lightning strike, incinerating all rational thought.  There was nothing but the wicked mouth of the only man she’d wanted for as long as she’d wanted.

Her lips and tongue submitted to his, following his lead as his mouth devoured her.  God, how she missed this.  Tears stung the backs of her eyes at the acute need, the longing.  She reached for him.

“If you touch me, I’ll lose it.”  His voice was husky and warm, the sound of sin.  “Why do you think I’m keeping my hands to myself?  It’s so I don’t take you right here.”

Fallon felt dizzy with want, leaning in.  “But, can’t we just—”

“I’ve been sitting in here all night thinking about what that asshole told me,” Lucas interrupted, leaning down to capture her eyes with his.  “Did you really call out for me, Duchess? All those nights, lying next to him?”

Her brain was screaming at her to lie.  To remember why she was here and the implications of her next words.  But the rest of her was still a quivering mass of pent up desire.  A younger woman who wanted only to please the man in front of her.  Her love.  “Yes,” she whispered.  “All the time.  I dreamed about you.”

Trish published her first book in 2015 and is currently working on her Chisholm Falls contemporary romance series.  A native Texan, Trish lives just outside Austin with her incredibly supportive husband and their incredibly spoiled dog.  She’s been an avid romance fiction reader since she was a teenager and still devours as many romance novels as she can when she’s not writing.  Her other loves include (in no particular order): warm weather, red wine, dogs, trivia, and Halloween. 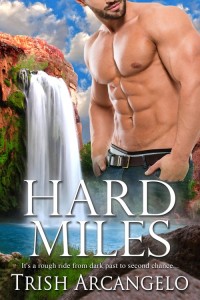 It’s a rough ride from dark past to second chance.

On the run from her psycho ex, Laurel Wheeler stops in Chisholm Falls, Texas for snacks at a gas station just before it’s held up by two desperate criminals. When one robber begins firing, a handsome stranger named Jase Miles saves her life. Hoping to make a little money and thank her rescuer at the same time, the broke Laurel agrees to a secret deal regarding Jase, who’s the town pariah.

But what starts as deception quickly turns complicated. Laurel begins to fall for the brooding man who hides his pain behind a mask of indifference. And Jase begins to fall for the sweet woman who, unlike everyone else in town, doesn’t treat him like a monster. Then a careless mistake shatters the fragile trust and their growing bond… perhaps beyond saving.

She walked toward him then, with purpose. Once she was standing directly in front of him, so close that he couldn’t pretend to ignore her, she’d said, “Just go with it.”

Laurel intended to kiss him then. He knew it. She was going to kiss him in front of everyone, a declaration. It would have been an act of kindness, her falling on the sword of a debt she thought she owed. The thought made him sick. He didn’t want her kisses of pity. He wanted her to kiss him because she was driven to, because she was mad for him. And though he’d do it again, even now he kicked himself for stopping that kiss. If pity was the price of admission to another taste of those lips, maybe it would have been worth it.

But he stopped her. He put a hand out to halt her and then led her toward the storeroom, his hand on the small of her back like a brand. Warmth pooled in his dick from just that small touch. As soon as the door to the storeroom snapped closed behind them Jase whirled her around until her back flattened against the brick wall, snarling. “What game are you playing?”

Her eyes went wide and the stunned look on her face almost had him apologizing, almost had him begging to try the kiss again. “No games,” she whispered.

He slammed his hands against the wall on either side of her head. “Defending me at every turn, as if you’ve been made my personal savior. I don’t need any paybacks for the gas station. We’ve been over this.”

“I don’t know what you’re talking about.”

“Oh? Then what the hell was that little performance out there?”

Laurel’s expression turned angry. God, she was even hotter when fiery and indignant. Jase was careful not to press too close so he could hide his raging erection.

She said, “Fine, I was just trying to help, you ungrateful—”

His stomach and his erection fell. “You what?”

The answering look on her face said she realized her mistake.

“So it was pity?” He spat, shoving away from her.

He pulled her to him again, unable to decide what he wanted. “Isn’t it? Well, then, by all means, baby, pity me.” And then he covered her lips with his.

While I really enjoyed this story, there were a couple of issues for me.  I felt that Jase was a little TOO hard on himself.  I know that small towns have long memories and it is really easy to fall into the trap of the hive mind in blaming him for something that happened in the past.  However, I just didn’t see it in his interactions.  Maybe it is because he was so good at isolating himself but I would have liked to have seen a little more of why he felt the way he did.

I’m also not sure what Laurel thought would happen after she took money from Jase’s sister.  I can get how it started but she definitely should have done something about it WAY before she did.  Readers realize this is going to blow up and she should have too.

Overall, though, I really enjoyed these two together.  When Jase lets himself, he’s a good person and is good to those around him.  Laurel may have had it rough but she’s got a good heart and the gumption to try for a better life.  A little battered, neither of them has had the best time of it but they find the support in each other that they need so together they can finally find a happy place.  And readers will enjoy being there with them when they do.

Trish has been an avid fan of romance fiction since she “borrowed” a book from her mother’s stash when she was just a teenanger (it was Hearts Aflame by Johanna Lindsey).  She’s been devouring all genres of romance ever since.  She nursed a long time dream to write stories of her own and finally realized there was no time like the present.  After completing and publishing her first book, a fantasy romance, in early 2015, she is now writing a contemporary romance series.

A native Texan, Trish lives just outside Austin with her incredibly supportive husband and their incredibly spoiled dog.  Aside from romance fiction, her other loves include dogs, warm weather, wine, playing trivia, and spending too much time on social media.