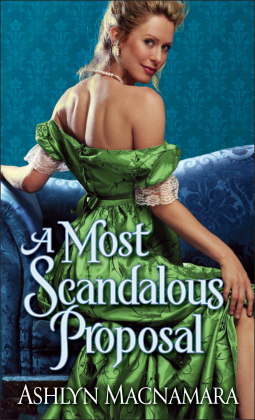 Miss Julia St Claire wants nothing to do with love or marriage, especially after watching her older sister, Sophia, pine for a man who hardly realizes she’s alive. But her parents have other plans and agree to a proposal from the newly named Earl of Clivesdon …. The very man her sister has loved for years. Benedict Revelstoke has been Julia’s best friend since childhood. When he realizes Clivesdon’s plan, he tries to save her. Only to realize that his feelings may be more involved than mere friendship.

A Most Scandalous Propsal is Ashlyn Macnamara’s romance debut and it is a historical treat. Not only do we get Julia and Benedict’s story but Sophia also has her happy ever after in the book. All of the characters are well developed and engaging. They have a lot of depth and emotion to them and readers will find themselves quickly drawn into their trials. Because it tells two interwoven stories, the book is a very emotion packed and fast read.

Julia has a certain, understandable, concern with matters of the heart. She has not seen very many positive examples of relationships built on love and it isn’t exactly a common occurrence with Ton marriages. It’s also very easy to understand why Sophia lets herself get caught up in her feelings for Clivesdon. And the relationship that she develops with a man that has been in a similar situation is delightful. Overall, this was an extremely captivating story about two women re-evaluating their views on love and finding where their hearts truly lie.

A Most Scandalous Proposal is a not to be missed first book from an author that is sure to quickly become a reader favorite. Macnamara has an eloquence and charm to her writing that will lend to a long lasting, and popular, career.