Blessings Georgia series, Sharon Sala, The Way Back to You

Fans of Sharon Sala’s book will be thrilled to see a new Blessings, Georgia book on the shelves. 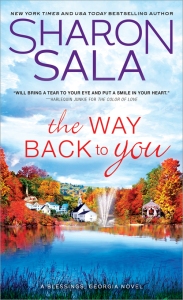 What do you do when your whole life is turned upside down?

Sully Raines sets out to find his birth mother, and ends up in Blessings, Georgia. A new surprise awaits him here, but of the best kind—his childhood sweetheart, whom he hasn’t seen since she moved away when they were teens, is living in Blessings now. He’s not sure she’s as happy to see him as he is to see her, but it’s been a lot of years, and a lot of water under the bridge…

Sully drove straight to the flower shop. A bell rang as he walked in, and an older woman in a colorful floral smock appeared from the back.

“I want to get a bouquet of flowers. Do you have some made up?”

“Yes. Here in the cooler behind this stand of stuffed toys. But if you don’t see what you want, I can easily make something else while you wait.”

“Okay, thanks,” Sully said. “Let me check these out first.”

“Seeing as how fall is upon us, we have several different sizes of fall bouquets, and with different kinds of flowers. And, of course, the roses,” Myra said.

He pointed to a bouquet of red roses in a crystal vase with a ruby-colored base.

“Those, in that vase with the ruby-colored base. How much are those?”

“Well, it’s a dozen American Beauties, and the vase is crystal, which makes it a bit pricier than others. It’s one hundred and ten dollars.”

Myra beamed. Her husband, Harold, had fussed at her nonstop because she’d used a vase that expensive, and now she could say “I told you so.”

“Wonderful,” she said, as she removed the bouquet from the cooler and carried it to the register. “Will this be cash or credit card?”

“Card,” Sully said as he pulled it out of his wallet.

“If you want to sign a card to go with the flowers, you can pick from these,” Myra said, pointing to the little rack on the counter.

“No card, I’m handing them to her in person.”

Myra pulled up a new screen on the computer. “Your name, sir?”

“This is wonderful. I’m glad to meet you. Everybody loves Melissa.”

Sully smiled. “I’m finding that out, but I’m not surprised. She was a sweetheart when we were kids, and she’s only gotten better with age.”

“You knew each other! Wow. Then you must have been really frantic when you were trying to get her out of the burning car.”

“I’d only arrived in town about an hour before it happened. I didn’t know anybody here, and I sure didn’t know it was her until we were in the ER. The last time we’d seen each other, we were thirteen.”

“Oh my! What an amazing story. If these are for her, please give her our best.”

“Yes, ma’am,” Sully said, and then they finished the purchase.

He made the drive back to Melissa’s house slowly and carefully, and he was happy to see her car in the driveway when he arrived. He got out carrying the vase, and then instead of using the key she’d given him, he rang the doorbell.

When Melissa opened the door, her eyes widened in delight.

“Delivery for the prettiest woman in Blessings,” he said.

She laughed. “I think you must have the wrong house.”

“Nope. I know exactly where I am, and these are for you. Where do you want me to put them?” he asked.

“I think here on this table in the foyer. That way I’ll see them all the time, coming and going.”

He set them on the table, then turned around and hugged her.

“Does this mean Elliot gave you good news?” Melissa asked.

“He gave me news,” Sully said, and felt the knowing of meant to be when he kissed her.

Melissa’s heart fluttered from the gentleness of the kiss, but she was dying for information.

“But what news? Did he know where she was?”

“That man talks around a subject more than anyone I’ve ever met. He told me my birth father’s name, thinking I already knew.”

“Marc Adamos. I never found the name on any papers, but now I know.”

“He told me not to leave Blessings.”

Melissa frowned. “But what does that mean, exactly? That she’s here? Then where?”

Melissa laughed and hugged him. “Don’t expect me to be sad about that.”

“He also said you were my soul mate and wished us a long and happy life together.”

She gasped. “Did he really say that?”

Melissa sighed. “Well, it took us long enough to find each other again. Maybe that is why it was so easy to fall back into this.”

“Works for me,” Sully said, then kissed her again until he heard her moan. “The feeling is mutual.”

Melissa felt like her whole body was humming—like someone had turned up the energy in the room.

Sully saw her shiver. “Are you afraid? Don’t be afraid. This is not anything to act on until we’re ready.”

“Then don’t do anything. When the time is right, there won’t be any confusion. That I can promise.” He wrapped his arms around her. “It’s all good, love. It’s going to be all right.”

“I feel like a forty-something idiot. This should not be so hard,” she muttered.

He chuckled, and when he did, she started to push away, then felt his heartbeat. Without moving, she put her other hand on her own. Their heartbeats were in rhythm.

She reached for his hand and put it over his own heart, and then put his other hand on hers.

“I know,” she said. “It’s pretty amazing. I adore the roses, and I adore you, too, Sully Raines.”

“Is this where I sweep you off your feet and take you to bed, or is this where we go eat pie?”

Melissa burst into laughter, and once the joy bubbled up, more kept coming, and she laughed until there were tears in her eyes.

Sully grinned and then put his arm around her and led her to the kitchen.

“Just because you went to see a psychic doesn’t mean you’re turning into one.”

He stopped in the middle of the kitchen floor. “Are you saying it’s not pie?”

“You and your sass,” Sully said, and kissed the laugh right off her face.

SHARON SALA has over one hundred books in print and has published in five different genres. She is an eight-time RITA finalist, five-time Career Achievement winner from RT Book Reviews, and five-time winner of the National Reader’s Choice Award. She lives in Norman, Oklahoma.

3 Copies of A Rainbow Above Us 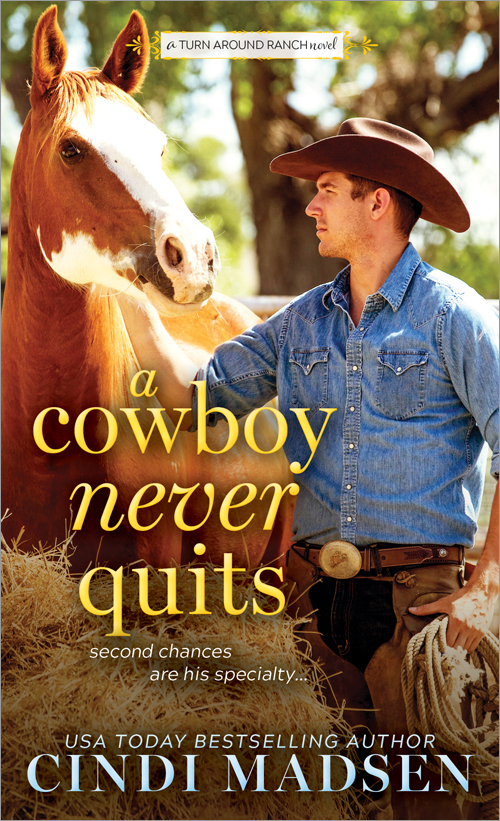 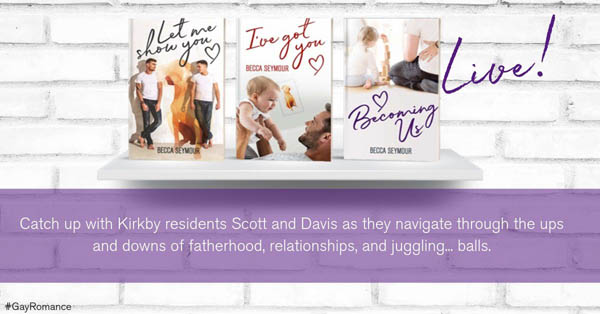