How can you say no to that cover? 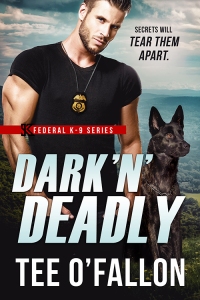 They’d never so much as kissed, but Tess McTavish never forgot the handsome, dangerous agent, Eric Miller, who vanished in a shroud of mystery. Now the last thing she needs is an ATF agent with his own agenda. Doesn’t matter that Tess and her brother are innocent. If Eric learns the truth of their past, they’ll never be free.

Eric’s drive for revenge against the man who targeted him and his colleagues in a deadly explosion still burns hot inside him. Another bomb is about to be detonated and he’s sure there’s a connection between that man…and Tess’s family. But Eric and Tiger will do everything they can to protect the woman he’s falling for from what’s coming…

Catch Up On the Series:

The man was absolutely, freaking hot from his toes to his head. She’d seen him without a shirt before, but then she’d been so concerned about his injuries, she hadn’t been capable of focusing on his extreme level of fitness.

Long, muscular legs filled out a pair of black sweats. A white sleeveless, sweat-dampened t-shirt that said FLETC on it, stuck to his chest and abs in a way that showed every cut muscle on the man’s upper body. A light sheen of sweat glistened on his thickly muscled shoulders, biceps, and forearms. Normally, sweaty men didn’t do a thing for her. Her perspective on that score had just changed. Drastically.

“Why don’t you just rearrange my furniture, too?” he said more than asked, in a slightly amused, and very deep, sexy voice.

“I’m doing yoga.” Trying not to drool, she rolled forward, arching her back as she transitioned to cobra then eased back to her starting point.

“I know that,” he said from behind her. “What do you call that pose?”

Too distracted to continue, she stood, trying not to stare at all those bulging, sweaty, glistening muscles. “You should try it.”

“You don’t know what you’re missing,” she insisted. “Contrary to what you obviously think, it will make you stronger.”

“If I want to be stronger, I’ll lift more weights.”

“You are such a guy.” She began to laugh, nearly choking when a bead of sweat trickled down his temple to his rock-hard jaw, and from there, slithered down his corded neck. She’d never thought of sweat as sexy before, but now… Oh. My. “Yoga uses different muscles and in a different way, stretching and strengthening them. It also contributes to good, healthy chi.”

He nodded, clearly feigning serious consideration. “A healthy chi is the cornerstone of any good breakfast. Don’t know about the candle.” He wrinkled his nose, the same way Tiger had, then picked up a yellow crystal from the end table. “What’s this?”

“Citrine,” she said. “It harnesses the energy of the sun. Some say it’s the energetic power center of a woman’s body, capable of catapulting her into a leadership role. It’s one of my favorite crystals.”

“One day I hope it jump-starts my business.”

“What business?” He set the candle back on the table and crossed his arms, making those deliciously sweaty biceps bulge even more.

“A shop. Something like that little corner store we went into yesterday.” When his brows lowered, she regretted confiding that in him. She was light years from accomplishing her goal, and seeing his skeptical reaction made her self-conscious. “It’s a pipe dream, really. I’m taking online courses to get my MBA.” His brows lowered further, and she parked her fists on her hips. “What? You don’t think I can do it?”

He made a scoffing sound. “You’re one of the most capable women I’ve ever met. I think you can do anything you set your mind to.”

For a moment, she was struck dumb enough by his words to be completely speechless. She honestly hadn’t known he thought of her that way. Knowing he did, sent a warm surge of…well, something through her system.

“And this one?” He picked up her favorite crystal, a rose quartz similar to the one she wore around her neck, only bigger.

“Rose quartz. It not only promotes positive energy, but enhances all types of love, especially unconditional love.” Something she’d yet to experience. Someday, perhaps. When all the stars and planets aligned in perfect harmony. In other words, probably never.

Eric rubbed his thumb and forefinger back and forth over the smooth, pale pink facets. There was something so intimate—so personal—about his big fingers caressing her crystal, it made her shiver.

“Can’t you feel it?” she asked. “All that warm, potent energy stroking your muscles and seeping into your bones?” The minute the words were out, she cringed, sorely regretting them. Any conversation involving “stroking” and “bones” in the same sentence… Bad choice of words.

His clear blue eyes darkened, becoming turbulent, the way she imagined the Caribbean Sea would look, all churned up by an incoming storm.

Oh, girl. Focus on something else. Besides the intensity of those beautiful baby blues.

Or stroking his bone.

Tee O’Fallon is the author of the Federal K-9 Series and the NYPD Blue & Gold Series. Tee has been a federal agent for twenty-three years and is now a police investigator, giving her hands-on experience in the field of law enforcement that she combines with her love of romantic suspense. Tee’s job affords her the unique opportunity to work with the heroic men and women in law enforcement on a daily basis. When not writing, Tee enjoys cooking, gardening, chocolate, lychee martinis, and all creatures canine. Tee loves hearing from readers and can be contacted via her website http://teeofallon.com where you can also sign up for Tee’s newsletters.