Carly Phillips, Take Me Down

Opposites don’t merely attract. . .they combust.  (With a tagline like that, who am I to resist?) 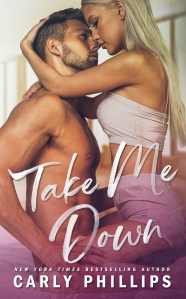 Parker Knight was going through the motions… and then he met her.

Parker Knight lived and lost his dream. Now he works for his family’s business, wearing a suit and pretending to be happy. A weekend away to plan a corporate retreat turns into a revelation when he lays eyes on Emily Stevens, the sexy owner of a small inn that’s seen better days. One look at Emily and the run down bed and breakfast and suddenly Parker has a purpose. He turns his short stay into a longer one, intending to act on the intense chemistry and desire that runs hot between them. While there, he plans to give Emily and her father’s inn a much needed infusion of cash and manpower.

Coming off an emotionally abusive marriage, Emily has an immediate bias against suave, city guys … But despite the slick exterior, Emily discovers Parker is sweet, charming and eager to help. And when she caves to their incredible passion, she discovers he makes her feel just as good in bed as out. Yet no matter how hot they burn or how well they mesh, Parker’s time with her has an expiration date. And Emily has an ex who refuses to accept that their relationship is over.

Parker isn’t a man who gives up. Sweet, sexy Emily Stevens is his chance to reclaim his life. He wants to take care of this woman who makes him feel … everything. If only he could figure out how to merge his two lives, everything would be perfect. But when her ex makes his move, Parker realizes what’s important. He only hopes he isn’t too late.

“It isn’t often I’m thrown into a good memory of my mom,” he admitted.

More often than not he thought about the bitter ones of his dad and his lack of attention, his many wives, and losing the one parent who loved him unconditionally.

“Do you know the key ingredient that differentiates a Snickerdoodle from a sugar cookie?” she asked.

He shook his head. “Can’t say that I do.” That memory escaped him.

“Cream of Tartar. It’s a leavening agent that gives the cookie its signature tangy flavor and chewy texture.”

“She made them every Christmas,” he said, hearing his own wistful tone. “We left them out for Santa.”

Emily smiled at his memory. “I’ll make them for you one day if –“ She shook her head.

“Can I take this to mean you’re not mad at me anymore?” he asked, leaning in on one arm.

She poured the brownie mix into the pan and sighed. “I was never mad at you. At first I was just scared to death. Then I was frustrated with dad and the situation. You being here, supporting his dream doesn’t help. But I’m not angry at you.”

The heaviness in his chest eased. But he was going to throw her an even more difficult question. He wasn’t sure if he expected an answer and given he didn’t know if he could answer in return, it wasn’t exactly fair.

“Okay then, good. What about before we came back? Are you still running from what we felt?”

She’d stuck a chocolate covered finger into her mouth and at the question, her eyes opened wide. The question had been bad timing on his part because his dick hardened at the sight of that finger in her mouth. He wanted her lips wrapped around his cock.

But, they had important things to discuss. “Running?” she asked on a squeak.

He pushed himself to standing and strode around the island, coming up to her and pushing her back against the counter. “Running,” he confirmed. “Not physically but emotionally.”

“I can’t let myself get too attached to you, Parker. You’re leaving. Sooner not later. Just because we don’t discuss it doesn’t make it not true. I need to protect myself.”

Her words sliced through him because they were true. Because he hated them. Because she was right and he didn’t want her to be. So he did the only thing he could do in the moment.

Carly Phillips gives her readers Alphalicious heroes to swoon for and romance to set your heart on fire, and she loves everything about writing romance . She married her college sweetheart and lives in Purchase, NY along with her three crazy dogs: two wheaten terriers and a mutant Havanese, who are featured on her Facebook and Instagram. She has raised two incredible daughters who put up with having a mom as a romance author. Carly is the author of over fifty romances, and is a NY Times, Wall Street Journal, and USA Today Bestseller. She loves social media and interacting with her readers. Want to keep up with Carly? Sign up for her newsletter and receive TWO FREE books at www.carlyphillips.com.