This isn’t my first visit to Cottonbloom … and I really hope it won’t be my last!!!

When the Stars Come Out

Cottonbloom. A beautiful, faraway place where a woman can escape her past—and find reason to stay forever in Laura Trentham’s When the Stars Come Out. . .

Willa Brown never planned to stay in Cottonbloom. She was on the way to somewhere else when she landed there and found work at the Abbot brothers’ garage. . .and a sense of comfort and safety that she had never known. The same holds true for Jackson Abbott himself. With one glance in her direction, he can make Willa’s heart melt. But what begins as an unrequited crush turns into something far more powerful than Willa could have ever imagined. . .

Jackson’s most meaningful relationship has always been with his car—and he’s not afraid to admit it. Still, he can’t help but become emotionally entangled with his new star mechanic Willa, who is definitely hiding some dark secrets of her own beneath the hood. Jackson desperately wants Willa to trust him, and to seek protection in his arms. But even as the two slowly surrender to their shared attraction, the danger lurking in Willa’s past remains a stubborn obstacle. Can she open up enough to give them both a chance at having real and lasting love? 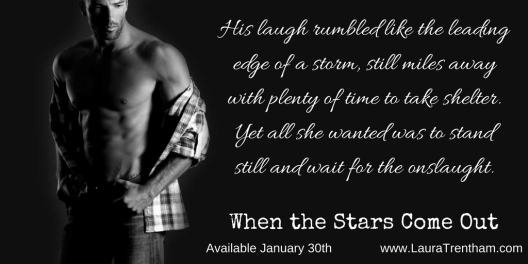 Praise for When the Stars Come Out

“The fifth installment in the Cottonbloom series, following Leave the Light On (2017) is hot and sweet, and readers will cheer for Willa and Jackson. Fans of Kristan Higgins and Susan Mallery will love the immersive world that Trentham has created in Cottonbloom, a small southern town divided by the Mississippi River.” Booklist

“When the Stars Come Out is a tender and sexy small-town tale of blossoming love.” BookPage

Returning to Cottonbloom has never been sweeter, When The Stars Come Out is pure literary magic, it’s sure to have readers mesmerized from start to finish!! Red’s Romance Reviews, 5 stars

Willa glanced down and back up at Jackson through her lashes. The gentle, flirtatious look hit him like a punch. This time his heart kicked like he might require someone to call 911. “Do I clean up good?”

He knew what she wanted to hear and later, in the dark solitude of his bed, he’d tell her and, even better, show her. But, for now, he tempered his response, hoping to get a rise out of her. “Not bad.”

She stepped forward and punched his arm. It might have stung if she hadn’t tipped to the side as her fist made contact. Her eyes popped wide and a little huff escaped. With reaction times honed on the racetrack, he wrapped his arm around her waist, bringing her flush with his body.

“You sure you know how to operate those shoes?” This time he couldn’t keep the smile off his face.

“They don’t require a license. And I was doing fine until you showed up.”

Her admission made him feel slightly better. He wasn’t the only one who was off balance. Her body notched into his perfectly with the added inches the heels lent her. His focus dropped from her sparking eyes to her mouth. Maybe he’d kiss the gloss off them right now. His lips hovered an inch from hers. So close he could feel the ramp-up of her breathing. Or was that his breathing spinning out of control?

Be still my heart – I just want to give every Abbott brother a hug!  Abandoned by their mother as small boys, they were loved by their father and their aunts, but they definitely missed out on something without that motherly love.  And now with the sudden death of their dad, things are even more complicated.

For Jackson it all comes to a head when he realizes that he might lose his right-hand woman.  Willa has been running from her past and trying her best to lie low.  And while she’s had a crush on Jackson for years, having him finally notice her as more than a great employee doesn’t fit her plan for hiding.

Trentham is one of the best at delivering character driven small-town romances.  There is such a feeling of community (here it shines with the closeness of the brothers) and when trouble happens they rally around each other.  And while Willa doesn’t think that’s what she wants, it is definitely what she needs.  It is time that she faces up to what happened so she can finally start living again.  Unfortunately she’s been on her own for so long, scared and hesitant to trust thanks to some bad experiences, so it is going to take a lot of patience and understanding on Jackson’s part to get her to that point.  Good thing the more self-contained Abbott brother has both in spades!

An award-winning author, Laura Trentham was born and raised in a small town in Tennessee. Although, she loved English and reading in high school, she was convinced an English degree equated to starvation. She chose the next most logical major—Chemical Engineering—and worked in a hard hat and steel toed boots for several years.

When not lost in a cozy Southern town or Regency England, she’s shuttling kids to soccer, helping with homework, and avoiding the Mt. Everest-sized pile of laundry that is almost as big as the to-be-read pile of books on her nightstand.

Follow me on Bookbub for new release or sale announcements: 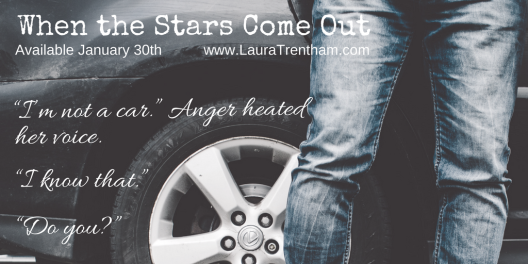 Enter to win the first four (4) books in the Cottonbloom series!

Kiss Me That Way, Book 1

Then He Kissed Me, Book 2

Till I Kissed You, Book 3

Leave the Night On, Book 4 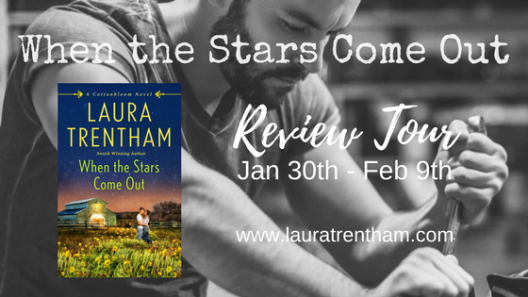