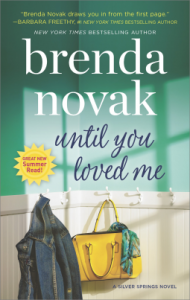 Until You Loved Me

Sometimes starting over means finding everything you’ve been missing…

After catching her fiancé cheating—with another man—usually straitlaced, workaholic scientist Ellie Fisher liberates her wild side just long enough to indulge in a passionate one-night stand with a tall, dark stranger she meets at a trendy Miami bar. Embarrassed by her recklessness, she ducks out the following morning without learning the guy’s full name, something that shouldn’t have been a problem…until a pregnancy test turns positive.

Being a professional football player, Hudson King has always been cautious around women. But this one had been different—so disinterested in his celebrity, so convincingly into him. When Ellie tracks him down, claiming she’s carrying his baby, he’s stunned. And more than a little betrayed.

But after growing up as an orphan, he’ll do anything to stay involved in his child’s life, so he urges Ellie to move to Silver Springs, where they can co-parent. Hudson has a lot of love to give, certainly enough for his child, and when their initial spark reignites, perhaps for Ellie, too…

In an interesting twist for a romance, a good portion of the early part of the story has the two on their own.  But in a weird way it kinda works because as a reader we get a better understanding of our lead characters.  For the romance though it kinda was bad because that meant that the two leads didn’t get to know each other during that time.  It’s realistic for how the story flows but does make the love story part a little harder to get to.  Being as skilled as she is, though, Novak does make it work.  Once they start spending time together, Ellie and Hudson somehow manage to get past their insecurities and learn to be brave enough to go after what they want.  It just takes a while … but what else do you expect in a romance 🙂

I really enjoyed Ellie – she’s super smart but her confidence has taken a bit of a hit because of her cheating, no-good ex.  A night with Hudson definitely goes a long way in getting her mojo back … until she finds herself pregnant and no way to contact the father.  I’m sure finding out that he’s a famous NFL player wasn’t easy but she handles it well (and I have to say she’s a lot more forgiving and understanding than I would have been.)

Hudson’s past definitely makes finding out he has a baby on the way a shock.  He’s always done what he could to limit the chance of an accidental pregnancy because no baby of his would ever feel unwanted.  So he does everything he can to make sure that he will be there now … after he pulls a few bonehead moves, of course!  While there may have been a few moments when I wanted to smack him, I always understood where he was coming from and the idea of what he’s gone through, and is currently experiencing, after being abandoned as a baby is heartbreaking.

Full of all the feels, realism, and interesting characters that you’d expect from a Novak book, Until You Loved Me is another great addition to the Silver Springs series.