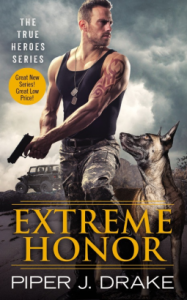 David Cruz is good at two things: war and training dogs. The ex-soldier’s toughest case is Atlas, a Belgian Malinois whose handler died in combat. Nobody at Hope’s Crossing kennel can break through the animal’s grief. That is, until dog whisperer Evelyn Jones walks into the facility . . . and into Atlas’s heart. David hates to admit that the curvy blonde’s mesmerizing effect isn’t limited to canines. But when Lyn’s work with Atlas puts her in danger, David will do anything to protect her.

Lyn realizes that David’s own battle scars make him uniquely qualified for his job as a trainer. Tough as nails yet gentle when it counts, he’s gotten closer to Atlas than anyone else—and he’s willing to put his hard-wired suspicion aside to let her do the same. But someone desperate enough to kill doesn’t want Lyn working with Atlas. Now only teamwork, trust, and courage can save two troubled hearts and the dog who loves them both . . .

You really have to like Alphas to get into David.  He’s sexy in an in-charge kind of way.  He’s military through and through, willing to take on the bad guys and kick some butt.  It also tends to make him think he always knows best and to be the strong-silent-type.

Lyn grew up with a career military man for a stepfather and it’s left her with some issues.  He’s not a caring man, hard and tough – his way or the highway kind of thing.  She’s spent her whole life trying to prove something to him.  Unfortunately that bleeds over into her first interactions with David.  Luckily they quickly find a middle ground that works for them … and that over time develops into something more.

This one reminded me a lot of Lynn Rae Harris’s HOT series, where you get romance mixed with suspense but not a lot of lightheartedness.  Which is fine – there are those kinds of books and then these kinds of books (and other kinds of books :)) but if you were expecting something with cutesy interactions you aren’t going to get it.  Instead you get a strong hero, a heroine that can keep up with him, and a bit of intrigue to keep them guessing.

I will warn you now that while we get some answers, we don’t get them all so there is sure to be a continuation of the mystery in future stories.  And I have to say that I’m glad this is the start of a series because I didn’t get all of the answers I needed about the guys running the Hope’s Crossing kennel.  I can’t wait to get to know David’s friends better 🙂  And to find out more about the group who caused them a bunch of trouble here.