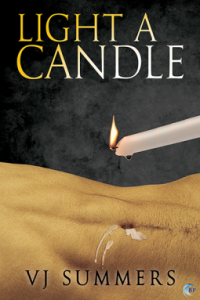 Will broke Dusty’s heart their senior year. One unexpected moment of passion between them, and Will freaked out. Not only wasn’t he gay, but he wasn’t kinky either—or so he insisted to Dusty. Their long friendship ended, and Dusty was left with only bittersweet memories of their last movie night together.

Ten years later, out as gay and a Dom, Will auditions for membership at Club Deviant, only to find that he’s been assigned an all-too-familiar submissive. His scene with Dustin feels like fate, and he’s determined to get back what they once had—and more.

Dustin had buried the pain of rejection deep, but playing with Will conjures all his memories of that one electric moment they shared and the friendship it destroyed. He’s built walls around his heart high enough to keep out the Trojan Army, but together, he and Will may find the courage to move beyond their past and face their future together.

(Publisher’s Note: This is a heavily expanded and revised edition of Velvet Memories, previously published in 2011.)

I’m working on expanding my reading – this time with LGBTQIA Erotica.  As you can tell from the cover, it features wax play as well as a D/s relationship between a couple of men … men with history.  It’s a history that makes it very hard for Dustin to trust Will, and trust is the basis of a workable D/s relationship.  Dustin definitely leads Will on a merry dance while Will tries to earn that trust again.

I really enjoyed seeing these two try to figure out how they can relate as adults.  They had an unusual, and not very strong, friendship in high school.  Unfortunately when Will runs from the idea that there may be more than friendship involved, it destroys Dustin.  And he’s spent years making sure no one else can get that close.  While Will regrets those actions, it isn’t easy to get past Dustin’s defenses.  Lucky for both of them, he doesn’t give up easily.

Light a Candle is both sexy and heart-breaking.  It shows how those scars that we get when young don’t heal easily and can have far reaching effects.  But that sometimes the heart wants something different than the mind says is safe.  Throw in a little D/s play and they steam things up very nicely on their way to finding out a way to relate together on a new level.