Toady’s feature is part of Harlequin’s Heartwarming line and it is that … with a sexy, big-hearted fighter at its center. 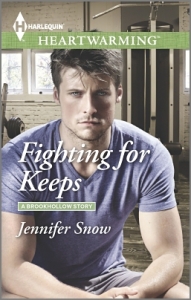 He’s kryptonite. And she needs all her strength…

Noah Parks is the ridiculously gorgeous, motorcycle-riding, cage-match-fighting equivalent of kryptonite for Lindsay Harper. And she’s going to need every last ounce of her strength now that she’s the legal guardian of her brother’s five orphaned children. For the sake of her new family, it’s time to give up her carefree single ways. Stop being the cool aunt and become a parent. And fight this crazy attraction to Noah. Sure, there’s a side of him she can’t help falling for…the one who volunteers as a firefighter and helps at-risk youth. The irresistibly kind and caring side. But she is a nurse, after all. She can’t love an MMA fighter, a man she regularly has to scan for physical trauma… Can she?

Buy it at Amazon

“I wanted to ask you something.”

Lindsey waited. He was silent.

“Go ahead,” she prodded.

“I was wondering if you would have dinner with me tonight.”

Seriously? The guy was wearing a hospital gown and booties and had half his body inside an MRI machine, and he was asking her out? Clearly the relaxation meds she’d given him were working. She hesitated. She wasn’t sure of Noah’s exact age, but she suspected he was at least four or five years younger than she, and given his chosen career, he wasn’t even on her radar of potential men to date. A fighter who put constant stress on his body and mind was not someone she would consider as a life partner—and at thirty-five, she thought maybe it was time to start taking relationships seriously.

I liked this story, but I didn’t love it. This is part of a series and I understand that returning readers may be pretty affected by the death of Lindsay’s brother and sister-in-law, but (you guessed it) once again I joined in the middle so I had no ties to them. Unfortunately I didn’t have ties to any of the other characters either and I’m not sure if that would have helped things.

All the way to the end I was doing pretty good. I understood where Lindsay was coming from on her objections to Noah’s fighting. It’s not a pretty sport and I don’t know how I would handle being romantically tied to someone who does it for a living, so her hesitation to get involved with him didn’t bother me.

And his persistence, while it could be stalkerish, is actually an endearing characteristic. She gave off just enough of a vibe to show her conflicting emotions that he knew she wasn’t completely against it. I like Noah – he’s dedicated and caring, has overcome a very difficult background and has made a place for himself. I was right there with Lindsay as Noah showed her the man behind the fighter, and I gave him a little piece of my heart as well.

My problem though is with the resolution of their conflict. I think there could have been more build up to the final decision. I liked it, I just didn’t understand it. It seemed a little too sudden to be believable – it was all one way thru the book and then it switches. I just wish we had a little more set up to it.

Overall though I enjoyed Fighting for Keeps and will look for more by Snow and in the Brookhollow series.

Jennifer Snow lives in Edmonton, Alberta with her husband and four year old son. She is a member of the Writers Guild of Alberta, the Romance Writers of America, the Canadian Author Association, and SheWrites.org. She is also a regular blogger on the Heartwarming Authors site and is a contributing author to Mslexia Magazine, WestWord Magazine and RWR. She has also taught RWA Chapters courses online. Her 2013 Holiday Romance-The Trouble With Mistletoe was a finalist in the 2014 Golden Quill Contest and the Heart of Denver Aspen Gold Contest.

Her publishing credits include two holiday novellas, previously published by The Wild Rose Press, now re-released or being re-released as self-published editions through Amazon. The Mistletoe Fever was an Amazon bestseller for two weeks in the category of Kindle Short Reads. Her six book small town, Brookhollow series is published through Harlequin Heartwarming and she has a new MMA sports romance series releasing through Berkley/NAL Intermix in 2015. RT Reviews has given each of her Brookhollow series books 4 stars.

She also hosts an annual SnowGlobe Award contest in recognition of holiday themed romance stories, with over forty entries each year, with participants ranging from new authors to NYT Bestselling authors, such as Brenda Novak and Sarah Morgan. More information about the contest can be found at http://www.snowglobeawardcontest.vpweb.ca

Around the World in Books