A. D. Marrow, Book Review, Chaos and Moonlight, Order of the Nines series 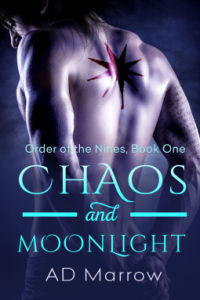 Order of the Nines, Book 1

The Nines, an elite group of vampires, was established to stand as protection for their race. Fractured by centuries of betrayal and loss, the group is now little more than myth, its remaining members scarred and shattered.

Taris, the oldest living vampire, is no stranger to loss and heartbreak. He is all that holds the Nines together as they struggle to save themselves from total extinction.

Enter the beautiful and briliant Dr. Sarah Bridgeman, whose medical research has resulted in a breakthrough for both humans and vampires. Her work may be the salvation this weary band of guardians has been looking for.

Taris needs to reach Sarah and enlist her help—before those aligned against him can act. Can a vampire king convince a stunning young scientist to save a species that isn’t even supposed to exist?

For now, only one thing is certain: no science can explain the explosive chemistry between them.

Chaos and Moonlight is the first installment in the Order of the Nines series, and is A. D. Marrow’s debut novel.

As the first story in a new paranormal series, Chaos and Moonlight does a great job of introducing the new world. I think there were a couple of places where an explanation might have been better happening earlier than written, but overall it’s well developed. Sometimes it is hard with the introductory novel to cover everything without throwing off the pacing but Marrow does it well – we get a great feeling for the society the vampires live in.  There’s a lot of intricacies to their history which are slowly handed out but I didn’t end up with any unanswered questions and was interested all the way to the end.

Taris is great hero material.  He’s strong and caring, taking his role as informal leader to heart. He is greatly affected by the setbacks they’ve experienced and the implications for their future. He, like all of them, is deeply invested in solving their problems – and that’s where Sarah comes in. I’m surprised at how well she takes the existence of vampires, but I think as a scientist that it might be easier to accept the unexplainable. Those difficulties definitely are an interesting twist – I won’t give away too many details because it plays a big part in why Sarah is brought into their world. But it’s one that I hadn’t thought about before but it makes sense and adds a nice complexity to their lives.

There are bad guys – what paranormal book isn’t made better by a villain – and I have to say I really want to see more from these. Despite all of the awful things that they’ve done, I’m intrigued by the idea of redemption … but I’m also afraid that too much has happened.  There are also good guys, of course, who will also get their own story.  I’m intrigued to see where Marrow goes from here since it looks like their is an answer to the big problem in the first book.

If paranormal romance is your thing (think Black Dagger Brotherhood or The Sentinels) then you may have found yourself a new series. With a large and fascinating group of characters, Marrow has the potential for a sexy new series on her hands.