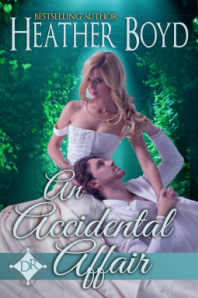 London’s ballrooms and bedrooms thrive on scandal and decadent pleasure and the summer of 1814 will be no exception for the Distinguished Rogues in Heather Boyd’s latest Regency romance.

Widowed beauty, Arabella Lawson, Lady Farnsworth, knows the value of independence after being trapped in a marriage that left her unfulfilled. Although she longs for a lover at last, she’s expected to chaperone her flirtatious niece during her first season. However, given the way the girl keeps disappearing every chance she gets, there is little hope of a good or speedy result. While searching for her charge yet again, she blunders into one of Lord Rothwell’s scandalous assignations. This time it’s Arabella’s turn to be on the receiving end of his hungry kisses, and she’s far from prepared to make the most of the opportunity.

Gossip may paint Merrick Bishop, the Earl of Rothwell, as a notorious scoundrel when it comes to women, but this season his intentions are honorable. Duty bound to marry, he’s determined to discreetly court an open-minded bride and prove the gossipmongers wrong by being on his very best behavior… until in his frustration, he mistakenly kisses the wrong lady and discovers that everything about the encounter feels so very right. Merrick never once believed he had a chance with shy Arabella, and when the unthinkable happens, she turns to him not for an affair or hopes of marriage but for his friendship and protection from her own family.

Can a rogue with a reputation for breaking hearts convince a widow who only hopes for an affair that their feelings are not only the stirrings of desire but the beginnings of the deepest and truest love?

I found An Accidental Affair to be a historical romance treat – it is sweet and engaging and I could hardly put it down. There’s romantic drama and family drama and even some danger, but it’s all given in Boyd’s very deft hand so the flow makes it very easy to read.

Merrick has to be one of my favorites.  He’s a former rake but he reformed himself, he’s ready to settle down and just needs a wife.  His father’s past, mixed with his own wild oats, makes it a little harder for some to realize that he’s ready to marry. Plus he’s got some interesting skeletons in his household closet that might be a little hard for some ladies to accept.  But most importantly he’s smart and honest and caring.  He may be at odds with some of family but he’s made a life for himself that he’s very comfortable with and that he would do much to protect.  His dedication and big heart make him an appealing husband for the right woman.

Arabella is a great match for Merrick.  She too is protective and cares about people, fitting in well in Merrick’s home. Unfortunately her first marriage was not a happy one so she does not necessarily want to do it again.  Merrick’s patience though pays off.  There are some misunderstandings here and there but the characters react realistically and everything is resolved easily.

There is a bit of villainy in the story and I’m not sure how it plays into any of the other Distinguished Rogue books since this is my first, but it is tied up pretty well.   And even though I haven’t read any of the rest of the series, I don’t think I missed out on much.  There may be some cross-over, but I found An Accidental Affair to be a complete story on its own.

With An Accidental Affair, Boyd gives her readers a lovely story full of fantastic secondary characters and two addictive stars.  It’s a slow build to their HEA but it is a sweet one and I enjoyed every step of the way.

There’s More To It

The Summer of No Attachments

Peril on the Ranch

Missing in the Desert

Then I Saw You

Talk Bookish to Me