Today’s guest post comes to us from Reese Monroe and gives us a look at her book Marked by Hades and the Bound by Hades series.  These heroines look like all sorts of fun!

My street team Rock Star, Katrina Whittaker, sat down and chatted with Sadie and Yvonne, the heroines from the first two books in the Bound by Hades trilogy. Sounds like they had a great time…then again, Katrina’s all kinds of awesome so I’m not surprised at all!

Katrina: Firstly, can you tell us a little about yourselves?

Yvonne: Hi, Katrina. It’s nice to meet you. I’d shake your hand, but…well, I have my leather gloves on, so I shouldn’t turn you to dust, but I’d rather not risk it. Matter of fact, I feel like I’m sitting way to close to both of you. **moves seat back**

Anyway. I’m a twenty-something, 200-year-old, ex-demon…Oh gosh. Maybe I shouldn’t start out with that. Let’s put it this way. I’m still working to figure out just who…and what…I am. But one thing’s for certain, I got me an awesome Mate who’s helping me figure things out.

Sadie: Hey Kat, hope it’s okay if I call you Kat. Thanks for having us here. I’ve never been to Australia before. It’s wicked awesome. I want to see all of it. There’s so much I don’t know about this place!

Oh, but you asked about us. Hi, I’m Sadie. I show up in book 1, Forged by Fate. I was just turning eighteen and about to graduate from undergrad when he rocked my world. I had my life all planned out: Six figure a year job, prestige, consistency, stability…I was determined to show the world a freakishly strong, super smart orphan like me could make something of herself.

Little did I know what Fate had in store for me…

Kat: How did you meet and how did you feel about this initially?

Yvonne: Ohh, that’s an interesting story…after the fact, anyway. **she glances at Sadie** I kind of…held her hostage. But, in my defense, it was when I was a demon. Totally screwed in the head and totally betrayed by someone I thought I could trust.

I was immediately intrigued by her. Mostly her intense desire to get back to Theo—her Mate. I’d always wanted someone to love, and when she talked about her Mate, I could see what they had was an epic love. So, when I first met her, she was unconscious, and unconscious most of the time, but when she woke up…yeah, I was totally jealous of her.

Sadie: Yeah, that whole holding me hostage sucked rocks, but…it turned out okay. And look, now we’re totally related. I pretty much wanted to kill her when I first met her. But I didn’t have a Mavet dagger. Thankfully. Looking beyond my desire to kill her, I saw she was a different kind of demon—yeah, sounds weird, but it’s true. And look. I was right!

Kat: How has life been since the events that happened that brought you two together?

Yvonne: Whoa. It was a little bumpy getting to the end point with Justin, but I can’t say much to that, Reese might vaporize me in the final book if I give away too many spoilers, but I can say this…the journey, while very trying and heartbreaking at some points, was worth it. I’ve decided love is worth any risk!

Sadie: I can’t complain. I’m mated to a great guy, get to vanquish demons to Hades which keeps the humans safe—oh, I’m still getting used to the whole not being human anymore thing. **she giggles** One other thing I’m getting used to is being married and the whole meshing of two personalities under the same roof. You know…socks lying everywhere, rolling the toothpaste tube up…

Kat: How do you both feel about being Marked? And the men The Great One has chosen for you both?

Yvonne: First of all, I freaked out when my Mark surfaced. I had no memory of who—or what—I was, so it scared me. I thought it made me a target or something. I mean, I woke up on a bench, naked and had no memory other than my first name. And to top things off, any living thing I touch turned to dust…So when this thing showed up **she taps her shoulder** yeah, I freaked big time.

Once I learned what was happening…thanks to Sadie…and realized I was Mated to Justin, I was happy, actually. I wanted to belong to something…someone, and he was an amazingly kind, generous person, so I was glad.

He, on the other hand, not so happy about it…

Sadie: That’s true **Sadie laughs** Justin was pretty set against the whole Mate thing. I always warned him he couldn’t stop it, but he’s a stubborn bugger sometimes. When my Mark surfaced, I was pretty confused—not to mention sick—and when I researched it, I didn’t like what I found. Scared me what little I found on the symbol. Knowledge calms me. It’s how I’m geared, so all the “unknown” that came along with this mark didn’t help calm me down much. So, I kicked Theo’s ass the first time I met him.

Can you blame me? I mean, he just comes on into my nice, neat, planned-out world and blasts through it like a freaking cannon. I eventually fell for the big lug and love the road The Great One put us on together.

Kat: How did you feel when you first received your markings?

Yvonne: I had this wicked-awesome dream, but y’all are going to have to read about that. I was sick for a couple of days, and it pulsed a lot. I eventually figured out that it pulsed when I was near my Mate or when things…got intense with us.

Sadie: I was sick, too. Hot dreams, yes. But I hate the sick thing. I thought for sure I had cancer or something like that. I couldn’t wrap my brain around how a mark could just…appear like that. Then again, the Shomrei world doesn’t always work in a logical manner. Learned that big time! Still working on being okay with that, but I’m getting better.

Kat: What do you foresee your future to be like?

Yvonne: I may never be able to touch any other living thing, besides Justin, without turning it to dust, but being mated to a 911 year-old Shomrei Warrior lends to an adventurous life full of twists and turns.

Sadie: Adventure for sure. We’ve got Lucifer to deal with so, like Yvonne said, life won’t be dull in the Bradford household.

Kat: Upon seeing Yvonne after your first encounter what did you think Sadie?

Sadie: Oh, I freaked. Eventually I stabbed her. **Sadie looks sheepishly at Yvonne** Thankfully she forgave me.

Yvonne: After I kicked your butt!

Kat: Overall what are your thoughts on your newfound lives with these sexy hunks?

Yvonne: Hands off, sister, or these gloves’ll come off. **She smiles** Kidding! Let’s just say life is…fun. And I’m looking forward to eternity learning everything there is about him **winks**

Sadie: Ohhh, Yvonne **Sadie waggles her eyebrows** You’re naughty! I’d have to agree, though. My Theo waited for me—if you know what I mean—so we’ve got lots to make up for.

Whoa. I’m wondering what Theo and Justin are thinking about this interview…Wonder if they’ll stop by to comment…

Thanks, Kat for interviewing the girls of Forged by Fate and Bound by Hades. This was fun. And thanks to Romantic Reads and Such for having us all here today to celebrate the release of Marked by Hades. It’s an exciting day, and I’m so happy Justin and Yvonne’s story is out there!

One choice away from eternity…

For 911 years, Gatekeeper companion Justin Bradford has denied the possibility of being mated to only one woman. He enjoys them all too much to settle down. So when he feels his mate’s Ahavah mark surface, his first instinct is to ignore it. But when he sees the leather-clad beauty in need of his help that’s easier said than done…

Yvonne wakes up naked on a cold park bench in a small town with no memory of who—or what—she is. All she knows is the gentle man who woke her was turned to dust when she touched him. And now the strange mark that appeared on her shoulder throbs in the presence of the raven-haired man now offering to help her…

As Justin and Yvonne navigate the mystery of her past, their bond grows, but the secrets they discover and the sacrifices that must be made could be enough to rip them apart for eternity.

Originally from Minnesota, Reese Monroe currently enjoys living in the sunny Arizona desert with her husband of seventeen years and her loveable Shetland Sheep dog, Maddux. Monroe holds a degree in psychology from Southwest Minnesota State University and a master’s degree from the University of Iowa. When she’s not busy writing her next trilogy, she can be found pounding the pavement, training to run her first marathon.

Reese Monroe is a contributing blogger at the widely popular site New Adult Alley and has been part of the New Adult revolution for years having penned over thirty novels in the exciting new category.

Marked by Fate prize pack including: a Marked By Fate necklace, $10 Starbucks gift card and a $10 iTunes gift card (if the winner is intl a $25 Amazon gift card will be substituted for the prize pack)

Click on the banner below to check out the other participating stops on the tour. 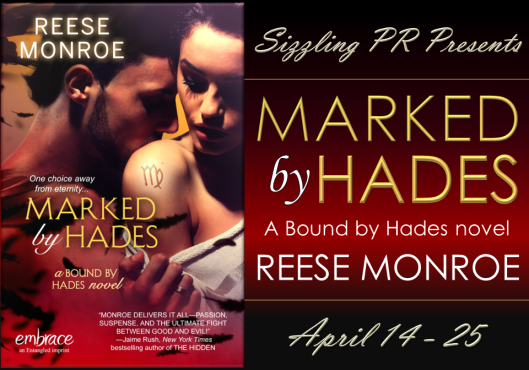