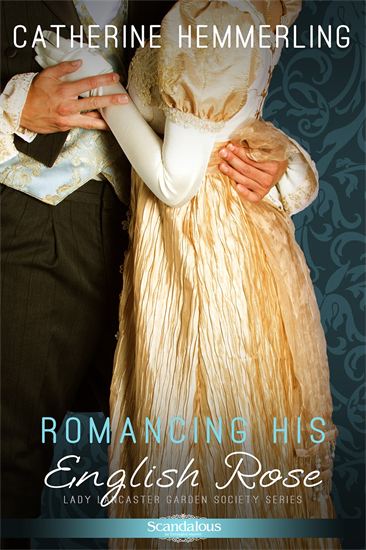 Rose Warren and Simon Trumbull may have been betrothed since birth, but that doesn’t mean they have to like each other.  Rose is sure the notorious playboy Simon will never willingly settle down, and Simon, well… he agrees.  Never one to be forced into anything, he’d rather drink and gamble with his mates than spend time with the bookish, bespectacled Rose.

When the two are thrown together to investigate a potential poisoning mystery, neither expects the sparks that fly.  Simon discovers that Rose is, in face, a brilliant sleuth and – even better – hides a delectable body beneath her flowing skirts.  Suddenly, falling into bed may be the best idea either has heard, but can Simon convince Rose his romancing is forever?

Romancing His English Rose is part of Catherine Hemmerling’s “A Lady Lancaster Garden Society Mystery” series – the follow up to Taming Her Forbidden Earl – and there is a lot of teasing about things that happened in the first book, plus a set up at the end for the next story.  This story still made sense but if you are like me your curiosity might get the best of you, with all the hinting at things that have happened or will happen.

What throws Simon and Rose back together is a problem with Simon’s cousin, Caleb.  There is some suspicion that he might have murdered his own brother in order to inherit the title, so Simon and Rose do some digging.  The intrigue portion is engaging – well-written and comprehensive, with no loose ends – although not so much a mystery but more of a suspense element that highlights the romance of Simon and Rose falling in love.  It is a good catalyst for their relationship and I enjoy how well it flows.

It seems to me that Simon has a quick change of mind about his feelings for Rose, but it works ok.  I do wish we could have been given more of Simon “before” – his rakish actions and his hidden intelligence – so his change is a little more fluid, but maybe that is something that I’d have seen if I’d read the earlier story.  I like him though and I love that the one person he is trying to keep out is the one person that believes in him and supports the man he tries to hide.

An intriguing romance with a great mix of heart and suspense, Romancing His English Rose is a fun choice for those who are looking for a little edge to their love story.