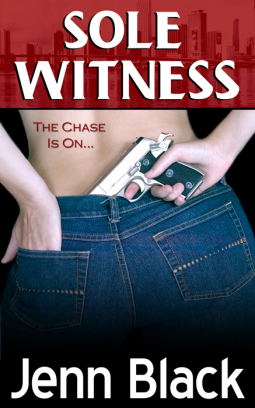 Lori Summers stumbles across a murder and suddenly her world will never be the same again.  As if that isn’t bad enough, the lead detective on the case is the man who took her virginity and then dumped her for someone more popular.  It’s been years but the hurt is still there and no way can she let him get close enough to hurt her again.  Detective Davis Hamilton made a horrible mistake all of those years ago, but he never expected to have Lori in his life again.  Will this be their second chance?  Can Davis keep Lori safe with a murderer out to get her?

Sole Witness isn’t a very intense mystery or suspense novel – in fact you know who does the crime as it happens and you get her perspective throughout the book – but it is a fun one.  The characterization isn’t all that detailed but that doesn’t mean they aren’t fun.  I think that if Black had put in about a hundred more pages to the story it would have added some depth but as it is it makes the perfect light, quick read.  The hero and heroine have their issues – both with themselves and each other – and though not all of those issues are resolved I was still satisfied with the ending of the story.  There is just the right amount of sizzle, intrigue, danger and angst.  It’s not going to change your world, but it will definitely bring a smile to your face and fun to your afternoon.

If you are looking for a light-hearted crime romance that you can pick up and put down but will enjoy to the end, Sole Witness is the perfect choice.