Book Review, Candace Havens, Take It Like A Vamp 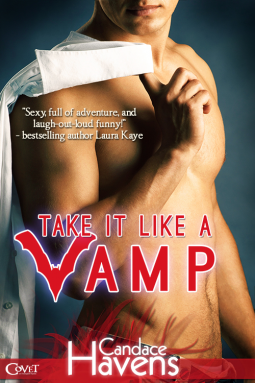 Nick Christos wants his best friend, Casey Meyers – she’s sweet, funny, irresistible and off-limits.  He’s a vampire, head of the Supernatural Council, and his life is too dangerous … but his resolve is weakening.  Casey thinks her neighbor is super yummy and way out of her league.  Agreeing to escort Nick to a charity function just proves it, because she may feel like Cinderella but she’s definitely not meant to live the life as a princess.  Now, though, she’s being targeted by some of Nick’s very powerful enemies.  Can he keep her safe … and his hands to himself?

Candace Havens brings readers a supernatural treat with Take It Like a Vamp and it is definitely one of my favorites this year.  It’s got that right amount of sass and fun, mixed with heat and humor – think Lynsay Sands’s Argeneau series or Erin McCarthy’s Vegas Vampires.

Nick is your typical 800 year old vampires (are there such things?) and thinks most about protecting Casey.  You would think that by now he’d have learned a few things about women but I guess since he wasn’t interested in more than a fling then he didn’t invest a lot in them.  But he is deliciously alpha and Casey definitely has what it takes to tame him.  She’s got enough spunk to keep up with him and everything that his life throws at her.

There are also a ton of fantastic supporting characters in Nick’s crew so I really hope that means that this is just the starts of a series.  I definitely want a HEA for the oh-so-dreamy Linc.  Take It Like A Vamp is the perfect introduction to their world – giving readers just enough details and characters to be interesting but not too much to overwhelm – and I’m looking forward to seeing more of it.

For readers who like romances with a little steam, a lot of fun, and a dash of heart mixed in with just that right amount of supernatural intrigue, Take It Like A Vamp is sure to delight.