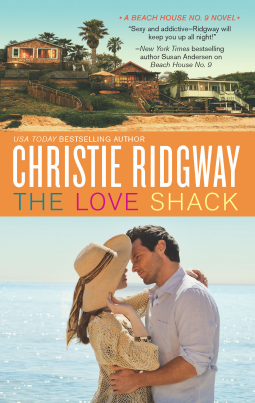 Christie Ridgway delivers more sun, sea and sexiness with The Love Shack, the final installment of her yummy beach-themed series.

Gage, like his brother Griffin from Beach House No 9, is a media correspondent in the Middle East.  But where Griffin writes about his war experiences, Gage takes amazingly evocative pictures of some of the harsher realities of life.  He’s in Crescent Cove to decompress from a bad experience and to spend time with Skye, whose letters got him through so much.

Skye, who has been a bit player in all of the stories, finally gets her own book and we find out exactly what has happened to make her so tense.  Having Gage around does a lot to help her feel more secure, but it will also break her heart when he leaves.  They rely on each other, both knowing it is temporary, but not counting on wanting so much more.

As with the other books, there is a secondary love story between Teague (who also appeared in Beach House No 9) and his best friend, Polly.  Being the B plot, it is a little bit shorter, but it is no less emotional.  I don’t think we got a good read on Teague when he first appeared, but Ridgway does a fantastic job of providing a heart-warming resolution to his romantic woes.

The Love Shack gives us complex, damaged characters who have to deal with a lot.  They are compelling – pulling on your heart strings and making you sigh with both happiness and sorrow (and maybe wanting to thump them on the head a time or two).

With this series, it is such a treat to have so many related characters who have their own issues but mesh so well together.  They make for an engaging and captivating group, who end up feeling like old friends.  Which means that readers of the previous books will love the updates on all the characters – almost everyone makes an appearance in this story and those who don’t are mentioned.  (I think that is my favorite part of a romance series, getting that update of everyone’s HEA life.)

I really enjoy Ridgway’s books – full of scrumptious men and sassy women, with intriguing problems to overcome.  If you haven’t already, go pick up Beach House Beginnings, Beach House No 9, and Bungalow Nights.  This series is the perfect excuse for relaxing in the shade and reading all day, so pull up a chair and enjoy.