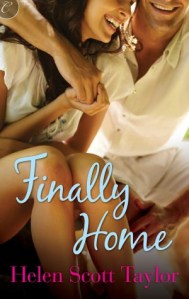 Finally Home is Helen Scott Taylor’s sweet story about a woman having to let go of her past in order to move forward with her future. Melanie Marshall is cautiously building a life for herself and her son as the manager of Greyfriar House Hotel. When her boss comes back from what was supposed to be his wedding trip without a wife, things get complicated. For unknown reasons, Jack Summers uses his new hotel manager as an excuse to call of his wedding. But now he can’t get her out of his thoughts and as he gets to know her and her son better, he realizes there may have been a reason after all. When Helen’s past finds her, though, can the budding romance between them be enough?

Melanie has some serious issues related to her marriage and the criminal actions of her dead husband. I really liked the fact that Taylor acknowledged that these would not be easily fixed. Too often romance novels solve problems with the power of love, which is nice in fairy tales but not so much in real life, and Taylor does a great job of avoiding this trap. Instead she gives us a more realistic look. Readers are given an in depth look at Melanie’s troubles and, though the may be hard to relate to, they are detailed and believable.

We don’t get to see into Jack quite as much, but he does show himself to be honest and loyal – both things that Melanie needs in a new mate. He’s happy, emotionally stable (although he has moments where he needs to grow a backbone), and content with where life has taken him. He’s a good influence on Melanie, showing her that she needs to relax and let herself be happy. He does occasionally prove that he isn’t as in tune with Melanie as he should be, especially at the end, but then again we all see things through our own filter. Overall, he’s supportive and works to help Melanie face her past.

This is a good choice for someone who is looking for a touching story about two people falling in love with a bite of realism. It’s not all roses, but then neither is life.